In the end, many of them cried.

Whether the performer is virginal and inexperienced when she first dips her (let’s say) toe into the adult industry (and there isn’t a performer I’ve talked with who hasn’t tried at least one position/opening/grouping for the first time in her life while being filmed) or she is expert at most of those things (but never all of them), by the time she has been in porn for a few months, she knows how hard it is to get noticed and to stand out. So to be recognized among hundreds of her peers in tens of thousands of scenes on Porn’s biggest stage—in recent years that of The Joint at the Hard Rock Hotel And Casino—is a big, gaping achievement.

“Of course I cried,” says Joanna Angel, this year’s AVN Awards co-host with Anikka Albrite. “When I won Most Outrageous Sex Scene (for her naked, bloody, hilarious role alongside Tommy Pistol in 2005’s ‘Re-Penetrator’), I couldn’t believe anyone knew who I was.”

“We watched about 900 boy-girl scenes this year,” says Shaulis. “And that’s just one category out of more than 200.”

Both companies and individuals begin sending in their nominated products (including DVD- and web-based scenes, full movies, marketing campaigns, suggestions for individual performances and bodies of work) on September 1 in a month-long orgy that used to be a lot more fun. When I was at AVN and other publications in the early 2000s, I received vaguely-useful For Your Consideration swag like branded thermoses, alcohol, and visits from the stars. Have you heard the joke about the Polish actress who came to Hollywood and fucked the writer? I’ll say only that I was single at the time, it never affected my voting, and they were Czech.

“Once my votes are submitted, they’re locked,” Shaulis says. “I don’t know until the winner is announced on stage who won.” Shaulis says that “the database guy” compiles the votes and then delivers them to Warren, “and they are the only two people who know.”

Prior to a falling out between former friends Paul Fishbein and early AVN editor Gene Ross (Ross created what I call The Gene Pool of adult industry bloggers, which grew to include Luke Ford, Tod Hunter`. an often disaffected and dirt-dishing group that nevertheless provided a pre-Web 2.0/social media dose of the type of backstage truth that an industry trade magazine was reluctant to publish), the AVN Awards trophies were manufactured by Ross’s brother. Today they are engraved after the awards, with winners collecting them later.

AVN’s offices are in a building across the street from the Chatsworth Courthouse, where citizens of northwest Los Angeles can hear a trial in one of a dozen courtrooms, pay traffic fines, or dine in its cafeteria. Meanwhile, AVN-nominated films are judged in a “curtained-off room,” Shaulis says, “because Pete Warren’s office is floor-to-ceiling DVDs.”

It should be noted that AVN’s editorial staff consists entirely of people over 40, 80 percent of whom are Caucasian (Miller is Asian). The extended part-time review staff is more diverse, but Shaulis says that “no one thinks the same way.”

In an industry that is very small, where ancient companies like Hustler and Vivid stay afloat by virtue of their back catalog and casinos and sex-tape tie-ins, where a good deal of the business is shamefacedly both supported and cannibalized by a tubesite company called Mindfreak, to which “everyday people” upload pirated videos to free sites supported by adult dating and boner pill ads, in which performers no longer fool themselves that they’re going to make a great living, well, the simple act of successfully navigating such a saturated environment to get an award makes people cry.

Even though AVN and its main competitor, XBIZ (many of the adult industry’s writers have at one time worked for both companies, including myself), do their best to creatively recognize as many entities as possible in categories that regularly stretch from 15 to 20 entries, Shaulis still still says that people leave unhappy, and let her know about it.

“I regularly want to punch people in the throat who are bitching about this or that,” she says. “This isn’t kindergarten.”

But wait—in kindergarten, doesn’t everyone get an award?

Joanna Angel says that, after working so hard on her own company, Burning Angel, every year since its 2003 founding, there were years that she left Vegas without anything.

I confirm with Shaulis some basic facts about something that threatened to overshadow AVN Awards week.

The performer Stoya, who on November 29 tweeted that former boyfriend and fellow performer James Deen had raped her, did not attend the Expo or the awards ceremony, though she had previously consented to moderate a panel on consent. Deen did attend the Expo, often followed by a camera crew, but otherwise “laid low.”

According to Stoya’s business partner, Kayden Kross, the former had in December divested herself of her share in the pair’s TrenchcoatX site. Ten other women had come forward to accuse Deen of misconduct on the set and off. No charges were filed. Both Deen and Stoya attended January’s XBiz Awards, which Stoya was contractually obligated to host. While several companies publicly broke ties with Deen, he has continued to work in the adult industry since the accusations (accusations he denies).

After the awards show, Shaulis and her boyfriend had vanilla maple ice cream at a restaurant in the Hard Rock called Culinary Dropout, then she went to bed and took a 10 a.m. flight back to Los Angeles the next morning. She says that non-porn friends envy her, but they’ve got it all wrong. 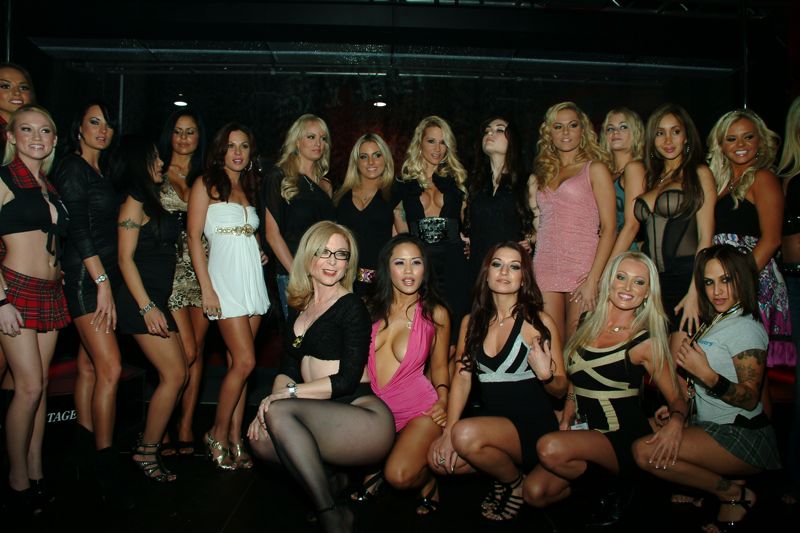 Angel, who was nervous about hosting and who flawlessly performed a rap called “I Like Dicks” at the show, needed to have sex.

“Yeah, I had sex the afternoon of the show to relieve some tension,” she says. “Otherwise I would have thrown up.”

[I attended the nomination party but not this year’s AVN Awards or Adult Entertainment Expo. I’ve included pictures I took at the party and at previous Expos to show the comforting sameness, year to year, that the Expos represent, and also because I’m lazy and doubted people would notice.]