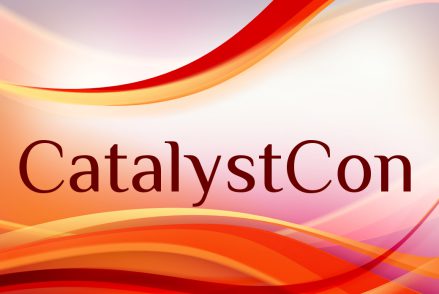 At no point during this weekend’s CatalystCon West were attendees told to just lie there.  Yet there was wiggle room around how best to express sexuality and assert individual rights.

Organizer Dee Dennis set the tone for the weekend, which took place over three days at the Woodland Hills Marriott.

“There are people at this hotel who didn’t come for a sexuality conference,” she said. “Please respect them in the hallways, too.”

This statement — and the fact that the 2-year-old bicoastal sexuality conference nabbed its highest-profile speaker yet in Clinton-era Surgeon General Dr. Joycelyn Elders — suggests the maturity of a movement. Too often the backlash of a long-repressed “scene” is a dramatic pendulum swing to be out, proud, and in the face of the world (Read the Onion article “Gay-Pride Parade Sets Mainstream Acceptance Of Gays Back 50 Years“). Yet this weekend it was doubtful that the large wedding party sharing the hotel with the conference knew what was going on down the hall.

But inside several conference rooms, a mannered debate was bubbling about how, now that mainstream tolerance — if not acceptance — of things like polyamory, “fat” sexuality, and non-heteronormative behavior had become “when” rather than “if” issues, people chose to be their truest selves in the world.

In the plenary address, activist and female to male transsexual Yosenio Lewis said he had no problem gently taking no bullshit when an attendee asked how to confront orientation-based ignorance.

“I work just a little harder to be politically correct,” he said, noting that “educating people” was part of the job of being alive.

Moderator Tristan Taormino, meanwhile, counseled an attendee “not to let [others’] discomfort shame you.”

The ignorance of people in authority — politicians, school personnel, and clinicians — popped up a lot over the weekend, as panelist after panelist explained that it was not enough to be out with one’s sexuality; the outside-world implications of it, such as dealing with medical staff, required constant shepherding.

Each panelist talked about lingering issues with acceptance of his/her own body, even in a world where (as Chase pointed out) “fashion models are thinner than 98% of Americans.”

Writer Ashley Manta said that she has good days and bad days in her body, but that, for example, she had to cut her mother out of her life because she needed people “to support me the way I am rather than who they want me to be.”

Occasionally there were hints of second-wave anger — a personal philosophy that falls short of acceptance of self in favor of taking down another — such as when N’Jaila Rhee began talking about women who have, and men who like “[shaved] vaginas like a prepubescent girl.”

Like the conference’s general theme of the assimilation of non-traditional sexualities into the great tapestry (I myself was introduced to the term “sex worker of size”), Chase’s panel acknowledged that acceptance begins at home, and as such was very much a work in progress.

“There are days when you wake up and just don’t feel good about yourself,” Chase said, “but that’s just the way it is, isn’t it? Isn’t it?”

But it’s looking hopeful. Hercules Liotard, in explaining that everyone is a sexual person and that it takes all types, said “George Clooney is very attractive, but in bed he might suck.”

In the next room, Sabrina Morgan led a discussion about sex trafficking and agency that, like her “How To Be An Ally to Sex Workers” panel at last year’s Long Beach CatalystCon, was as precise as ever. She cautioned that the pitfall of the well-intentioned is to think that someone becomes a sex worker having lost the ability to make decisions.

“Even though sex traffickers have guns and money, and sex workers have debt and expensive shoes,” she said, “choices that are made from a hard place are still choices.”

It is a narrow path to follow, this commitment to not invalidate a sex worker’s choices but, Morgan says, “we’re in the position of putting nuance and introspection into the debate.

“We have the right to make a living,” she continued. “Don’t invalidate us for mixing sex with economic self-determination…it doesn’t treat sex as ‘sacred,’ it ‘others’ us.”

There were product demonstrations from marital aid and sex-work concerns throughout the hotel, and I visited two that I’d thought were something else.

“They just left a big old stain on the sheet,” says Tom Stewart of Sportsheets, a Huntington Beach-based manufacturer of sex toys led by its flagship product of 20 years, an ingenious velcro sheet and handcuff arrangement that the former Marine pilot began selling to swingers conventions in the late 1980s.

“I didn’t know the swinger world at all,” says Stewart, who eventually brought in his brother and sister to the business as orders took off. “I went to one place and this couple just started fucking right there on the bed. I called my brother, said ‘Get in here and look at this!’ After they were finished, we tried to daub the stain off with a towel.

“Then another couple comes over, and the lady just takes the towel right off and they fuck in the wet spot.”

I had thought Sportsheets were like some racing form or some other canny Vegas-style business that managed to sneak into adult conventions, like the people who sell 400-threadcount sheets at the Adult Entertainment Expo.

Another company I visited was Slixa, an elegant marketing website for escorts with great How To blogs as well as compelling photography. The site is paid for with ads from escorts as well as escort agencies.

I’d just thought Slixa was some kind of lube.

“A lot of people do,” says spokesperson Tizz Wall, handing me a practical and microwave-safe Slixa mug.

I was invited to a hotel suite to see a demonstration of the 15-Minute Orgasm presented by Canada’s BlissBringers. I’ve been in the room for feats like this before, and I thought I would stay for up to 17 minutes and then go downstairs to dinner.

I had it wrong. I was limiting myself.

I wasn’t being open.

I shamed myself for not intuiting it was a sex party that happened to have snacks.

Friends, I drank some drinks and saw some women that I would have dearly liked to have treated to at least a 12-minute orgasm, but I had to go read at Bawdy Storytelling.

Sounding like a forlorn Mr. Microphone ad, I said, “I’ll be back to pick you up later.”

But there was no later.

I went to the packed Bawdy Storytelling downstairs (Tristan Taormino, Cunning Minx, Queerie Bradshaw, Charlie Nox, and Ashley Manta told some great stories), unraveled my poignant narrative, and then headed back upstairs, where the party was winding down.

Like the conference itself reflecting a certain maturity, I swallowed hard and accepted that it just wasn’t going to happen for me that night. Oh, I wanted it to happen, but forcing that sort of thing looks bad on everyone, and kills our fish and ducks.

I was not able to attend the final day of the conference, in which UNLV professor Lynn Comella interviewed Dr. Elders, but I will go back. Like myself the other night, CatalystCon thrives on a thoughtful take on unfinished business.