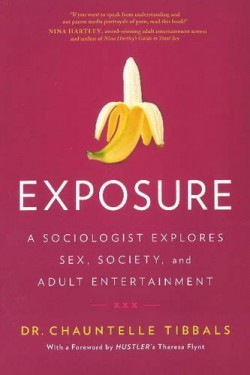 ,” by Chauntelle Tibbals, Ph.D., would be a Jane Goodall/Marlin Perkins-style journey through the Heart of Darkness that is the adult industry. Instead, the engaging (and sometimes wide-eyed) Tibbals offers a refreshing look at a business that has often proved academia-proof.

The reaction of other academics to Tibbals and her study is where “Exposure” emerges as a pioneering work. The book opens with a heartbreaking meeting with a graduate advisor and is peppered with snubs from eminent sociologists and bitchy people at parties. Regardless, Tibbals made it out of the viper-swarmed groves with her doctorate, a commitment to not abandon her subject matter and, well, a continued struggle gaining acceptance from fellow scholars.

In addition, Tibbals offers thumbnail sketches of people significant in the history of pornography, such as Traci Lords and Linda “Lovelace” Boreman. All in all, “Exposure” is a memoir that is always coming of age (just like Traci Lords!) as we experience Tibbals’ shock, curiosity, acceptance, eye-rolling, and defense of an industry she has studied for a decade.

Where “Exposure” left me wanting more (I used the phrase “blue balls” — a term of art in the milieu in which Tibbals has immersed herself) was the selective dropping of names. Where Tibbals offers condensed histories of Linda Lovelace and Traci Lords, she often makes up or obscures the names of companies, academics, and porn personalities — entities with whom she has had direct experience and which would have, I believe, made “Exposure” more immediate and relatable. She shares an anecdote about wrangling a bunch of sex dolls as part of her internship at the Adult Entertainment Expo. I happen to know they were RealDolls modeled after Wicked Pictures stars, one of whom was groped by a soggy fan, but Tibbals doesn’t mention the company. If it’s a memoir, I want to know who these people are!

In terms of the blue balls aspect, that was also a purposive choice. Some names are mentioned – things that are public knowledge (box cover text, Traci Lords, etc.) but other aspects were left veiled. When I was in the very early stages of this project, talking with different publishers and “think” people, inevitably, what every single person wanted was some form of gossip. That was really telling to me (like, in terms of where people’s heads were at), and it felt like the adult entertainment industry was only interesting to people in some sort of gooey, sordid, or generally titillating way. I get that, but that’s not what I wanted to write about in “Exposure.”

I do appreciate Tibbals’ response to my question, even if it makes me feel like I’m a bad person for wanting to know who “Akeela Song” or “Rod Johnson” really are (or if they really are) or to hear any of the juicy stories that may have tested the good doctor’s forbearance. Because we all have a lot of them. I wanted more of the memoirist and less of the sociologist. I wanted to know if Tibbals tried any of the things she learned in any of the movies she watched at home. Would that have made me a copy of her old thesis advisor, the one who shrieked “Why do you want to watch people fucking, Chauntelle?” Have I missed the point? Has the abyss begun staring into me? As Tibbals likes to say in her book, it’s problematic.

“Exposure” is one woman’s journey through a world that seemed to be a lot nicer to her than the one she came from, and students and educators alike would do well to follow Tibbals’ example of gentle, methodical scholarship.