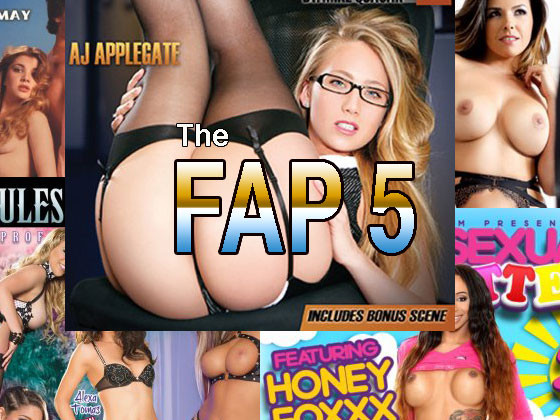 Each week I check the bestsellers from Gamelink.com and write a provocative and heartrending series of blurbs for Playboy Radio. Follow along as Playboy Radio’s Lexi Stetzel delivers the week’s most popular movies as determined by Gamelink customers.

Oooh baby! This week’s Fap 5 features some old chestnuts as well as women — some of whom are WIVES — getting nutted both ON and IN their ASSES. This is no April Fool: These are asses that you need to take seriously.

In its second week in the countdown this decade, Number Five comes all the way from the 1980s:

Number Four is a special movie in which the pop shots don’t go on the outside, but way up on the inside:

Our Fap 5 Threeway combines the aforementioned creampies with hotwifing. It’s the genre-straddling:

“HE CAME INSIDE MY HOTWIFE“

Like that’s a bad thing. When you’ve got a hot wife, like Danica Dillon in this Gamelink VOD exclusive from New Sensations, sometimes you want to, you know, pimp her out a little. That is what is known as hotwifing, when you treat your wife like a box of really good cigars that you share with your friends and/or strangers. And while your wife pretends she’s doing it for you, she really thinks you’re a huge creep and just lets you think that you’re calling the shots. Either way, it’s fun for us to watch, and Danica Dillon is delicious no matter whose wife she is.

Number Two suggests a world in which on any given night there are more than a hundred transsexuals willing to babysit your child:

You know what it’s like: Tough day at work, a long drive home…you don’t want to make your kids dinner and read them a story and put them to bed. That would make you a responsible parent. And, since you’re already not winning any prizes, why don’t you fuck the transsexual babysitter, too? Holy crap! Where ARE your kids??!

Finally, making its debut at Number One is one of those movies we hope were drawn from real life: