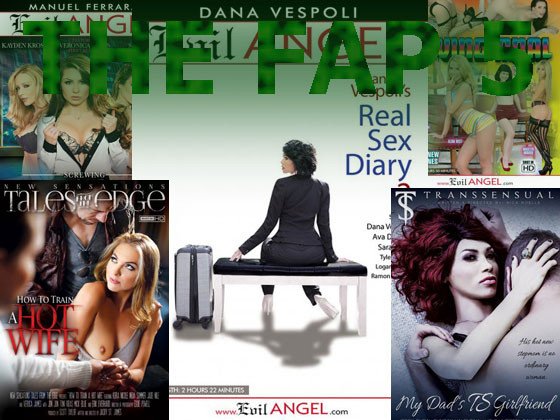 You will be forgiven for thinking Number Five is a Forrest Gump parody because of it’s cover AND because Dana Vespoli gets it right in her box of chocolates:

Number Four is another in a genre that is proving to be catching fire:

“TALES FROM THE EDGE: HOW TO TRAIN A HOTWIFE”

Hotwifing, in case you don’t know, is when a dude pimps out his wife to friends or strangers like he’s sharing the really good tequila. And the wife goes along with it because it means she can fuck other dudes and pretend she’s doing it for her husband’s benefit. Like the Make A Wish Foundation but nobody dies except the relationship, eventually. Ha ha! Just kidding. Everybody’s totally into hotwifing.

Our Fap 5 Threeway is all about the ass, and one man’s obsession with it:

Number Two is a new twist on an old favorite. How do we integrate transsexuals into the modern family? Well:

Our Top of the Faps this week brings together some seasoned pros who each love each other very much. It’s: