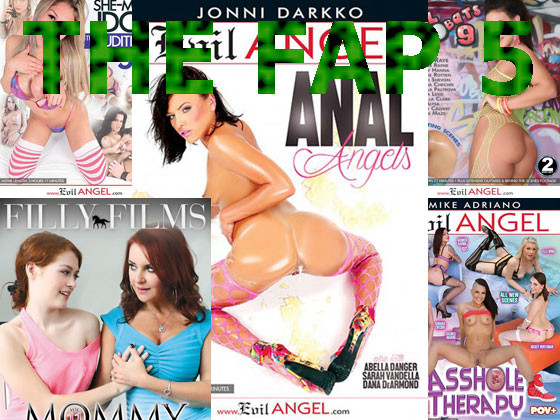 It’s official: the star of this week’s FAP 5 is Adriana Chechik. She’s in 60 percent of the movies, and each one of those movies is about a little tiny hole that she somehow makes look very big. The other two movies feature a perennial favorite — transsexuals! — and a new fad: getting fluid-bonded with someone not related by blood.

Normally, Playboy Radio’s Lexi Stetzel reads the Fap 5 via the magic of Internet Radio and “embedded files,” but she is sick this week so you’ll have to make do with my evocative text alone, just like in Pioneer Times

What better way to ease into this week’s onslaught of lust and debauchery than with the gentle, nurturing fuckfest that only a stepmother can provide? It’s

In case you weren’t aware, the “Mommy And Me” series isn’t for haggard and unshowered alcoholic moms to play pattycake on the low-pile shag carpeting of the local public library with their squalling tots while you’re there trying to steal internet. Instead it presents a series of believable vignettes in which stepmoms seduce their precocious, big-nippled 18-to-19-year-old stepdaughters while Dad’s away. Just in time for Greek Orthodox Mother’s Day!

Down from Number Two last week, I like to think this is something you’d see backstage at Cirque Du Soleil: It’s

Our Fap 5 Threeway is also our Title of the Week:

We now come to Number Two, which is about the ass, too. To, Two, Too: Keep doing verbal gymnastics like that and EVERYONE’s gonna give up the A.

Finally, our Top of the Faps this week again puts transsexuals on the pedestal:

You know, when there isn’t a transsexual title at Number One I feel a little sad, frankly. Last week, when Jesse’s “Alpha Female” was on top I thought: What if Jesse were a tranny? Then I thought: Am I supposed to use the word tranny anymore? Then I was like: But don’t many transsexual porn stars refer to themselves as trannies? Isn’t this America? Don’t we get to say what we want, even if we’re full of shit? Speaking of that, there is nothing in “She-Male Idol” that remotely resembles “American Idol,” and for that you can thank Joey Silvera.