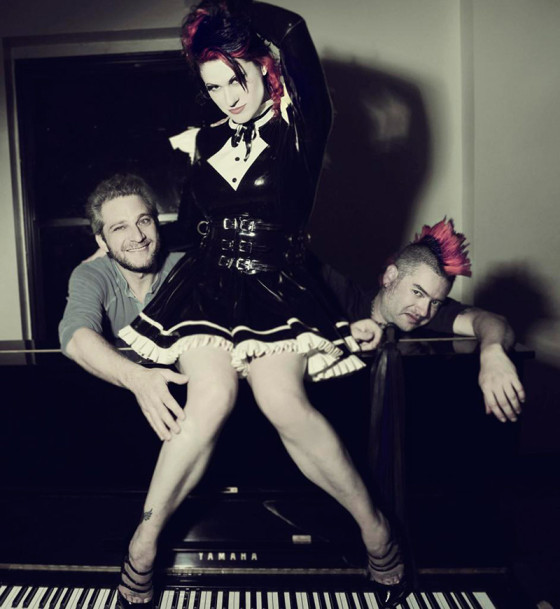 “Home Street Home” opens with a trio of steampunk Fates introducing a little clan of street rats, each an archetype; depending on how much time you spend on the street, you might recognize Mom, Nosmo, PD, Trashley, and Special Ed from your local street corner. Home Street Home follows their development as a family when they take in a runaway felling an abusive cop father. Home Street Home explores, among other things, relationships on the street and the ways people build families when the ones nature provided have failed them catastrophically. The complexities and emotional quicksands of so many resilient but still devastatingly damaged personalities provide fertile ground for co-creators Fat Mike, Goddess Soma, and Jeff Marx to touch on addiction, abuse, BDSM, jealousy, and the fact that when nothing else in the world is easy, love is both a refuge and a trap.

Home Street Home’s portrayal of a gutter punk’s life on the street veers wildly between a Disney fantasy world and a nihilistic nightmare, slaloms between toetappers about the glories of drugs and lesbian BDSM and grim revelations about incestuous rape and heroin withdrawal; We are given, in rapid succession, a revelation about three homophobic brothers torturing their youngest sibling, an exhilarating shopping/stealing spree, and a pitiless father/daughter rape scene with a mother literally looking the other way. Among these fireworks, though, are sprinkled powerful little nodes of interpersonal contact – a street whore and his john connecting, two street girls finding refuge in the intersection between love and pain, and many, many exquisite little examinations of the joys, terrors and betrayals of the people you love, or ar supposed to love. 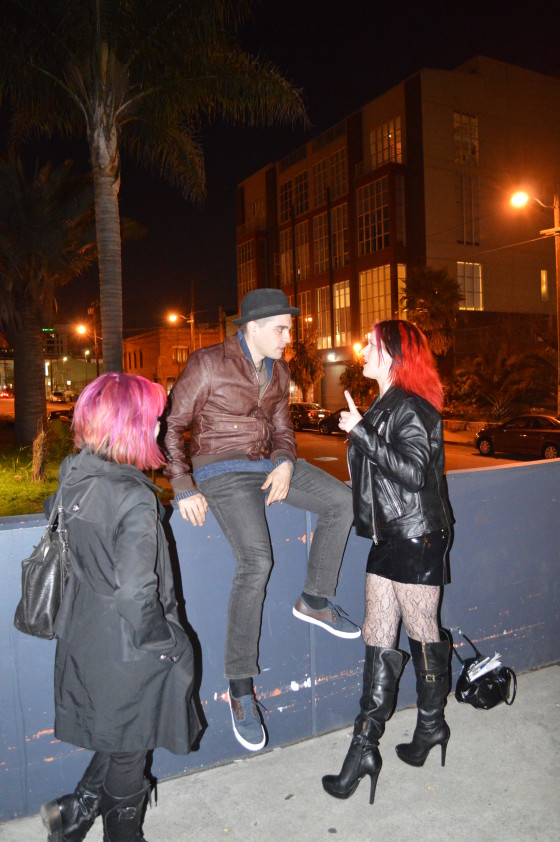 The production I saw was the first full performance of the show, but it’s not something that just popped up. “I’ve been working on this for fifteen years,” said Fat Mike. It shows every sign of having been worked on for fifteen years, too, as well as every sign of not being finished yet. Staged at San Francisco’s Z Space, the show was technically flawless, and a question and answer session with the creators afterward garnered a rush of support from an appreciative audience. Mike, Soma and Marx, along with director Richard Israel, got overwhelmingly positive feedback from the audience members who stuck around to respond to the request for criticism. Most of the people who commented couldn’t come up with anything negative, and the session broke up after one man stood up and called it “a home run.”

I told Fat Mike afterward that I would call it more of a solid 3-run double; he asked if I would go to triple, and I wavered. Triples are really hard, and honestly a double is just as good, but I didn’t want to stand around debating baseball metaphors with him. A home run, though, can break the momentum of a game, and Home Street Home is definitely still accelerating. The creative team has gone through several different endings – the most recent one to be scrapped involved the cast killing a cop and burning down a building before fleeing the city – and talking to Mike and Soma afterward makes it sound like the whole production is still in a choose-your-own-adventure phase and even they don’t know yet where it’s going to end up.

There’s not a dead spot in the casting; all of the compellingly complex parts are inhabited fully by the players. Trashley (Lauren Patten), PD (Kevin Hegmann), Mom (Kristen Piacentile), Nosmo (Matt Magnusson), Sue (Justine Magnusson), and Special Ed (Alex Robert Holmes) careen around the stage, clearly reveling in their roles and giving everything they have, and the backup players stand out just as strongly.

About P. Weasels 3 Articles
P. Weasels has been working in various aspects of the porn industry since 1997, and has been a fan since 1975. He has also worked in the videogame and comic-book industries. In his spare time, he performs as a storyteller at various events in the San Francisco Bay Area and looks for things to do in the San Francisco Bay Area that will make for good stories. He has written for Gamelink, Kink.com, and the San Francisco Chronicle, and wishes he had spent more time playing baseball as a kid, because he thinks he would have made a good catcher. Email if you want to hear his idea about a great escort agency.