In “Lady Valor: The Kristin Beck Story,” there are no shots of the awareness-raising transwoman pulling off her fake eyelashes and weeping in a dressing room mirror. Why? Because the CNN Films documentary — which screened at this weekend’s CatalystCon in Los Angeles — doesn’t approach the former Navy SEAL’s transition from man to woman as a sexual one, making her story more accessible and non-threatening to the audience she needs to reach.

“This is made for people from Oklahoma and Kansas,” the earnest and affable Beck says after the screening. “That’s why there’s a dog in every scene, a gun in every scene.”

“Lady Valor” follows Beck (and her dog) across the country in an RV, where she eventually visits family members in her Long Island hometown. She handily destroys targets set up in her dad’s back yard with various weapons, and proceeds to execute flawless defensive driving maneuvers in a pickup truck. We meet people in the town who are proud of Beck’s 20 years of service, and we watch as the soft-spoken, muscly 47-year-old quietly wins people over.

Beck was known as Christopher until 2011, when she retired with the rank of Senior Chief Petty Officer. Instead of footage of drag shows and gay clubs, we watch firefights, plane jumps, and a bearded Beck negotiating with Afghan tribesmen.

It is an outstanding documentary that underlines the fact that if America is reflected in her military, then that is the place we must go to reckon with our notions of gender.

“The military is great for transmen to hide out and be tomboys,” Beck says. “And good for transwomen to build armor around themselves.”

Beck the soldier is depicted as a man with a death wish, always first into the fray and volunteering for dangerous missions. Beck drank, was distant, and alienated two wives. The documentary stresses that it was Beck’s pre-transition behavior that is the cause of her estrangement from her two sons.

But Beck the transgender activist is just as driven but far more gentle. We witness the sadness of her family life — her boys won’t talk to her, several siblings and her mother decline to be interviewed — but also watch her endure these setbacks with grace and quiet humor. She looks so familiar. In most of the movie she resembles the beefy mulleted dude at a 1987 Bon Jovi tailgate party, but for the blouses.

After the screening she mentioned that she has a joke when meeting with Pentagon and other Department of Defense officials.

“I’ve still got Top Secret clearance,” she says. “I say ‘Look! I got in here with my guns!,’ I go in there with my medals and Purple Heart and they can’t say shit to me.”

Beck said there is one transgender woman killed per week in America, and related statistics that place the transgender teen suicide rate at 40 percent.

“All I’m asking is to give people a chance,” she says. “Don’t get punched in the face (for being transgender). Don’t get stabbed.

“Just remember that TG girl you’re talking shit to might be a Navy SEAL.”

Beck says that what is shown in the documentary is calculated. “I’m preaching to the chorus here,” she says to a Q&A crowd pleased with its knowledge of buzz terms like “rape culture,” “gender fuckery,” and “consent.” “But I’m not going to convince anyone [in the heartland] unless they cannot deny my dedication to freedom.” 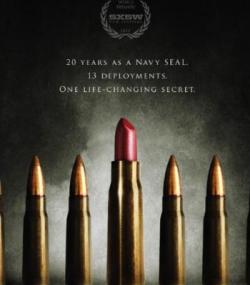 Despite its historical incalcitrance the military, Beck says, is showing signs of coming around. Despite this, some of Beck’s NAVY buddies admit to feeling betrayed by her transition. We meet several of her fellow SEALs, each of whom praises his buddy’s skill and resolve, then grudgingly accepts Kristin’s new reality. A muted exchange in a local bar shows another tough Navy dude accepting Kristin by virtue of her guts.

I had gone to the CatalystCon Film Series eager and expecting to see awful amateur nudie movies and instead was knocked for a loop by “Lady Valor.” Beck just refuses to talk like the strident and easily-offended activist. She speaks a language more native to how I grew up. We watch her shoot skeet, shoot pool, and drink beer and we realize — absent polarizing “sexuality,” — that she’s just an ordinary person who happens to have been a Navy SEAL and also happens to be transgender. We like this person.

“It’s not all drag queens and sex,” she says. And keeping those in-your-face elements out of it is the Hearts And Minds campaign of “Lady Valor.”

Beck is now settled in the Washington D.C. area and is studying for her Master’s degree in International Relations. She is mulling a run for Congress. I would vote for her.