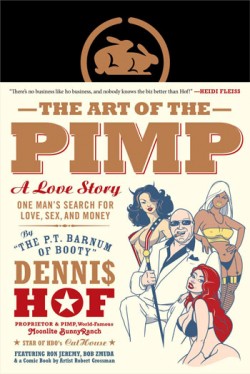 By the end of Dennis Hof’s memoir “The Art of the Pimp: One Man’s Search for Love, Sex, And Money

,” detailing his transition from gas station owner to time share salesman to impresario of seven Nevada legal brothels (including the flagship Moonlite Bunnyranch), the reader is left with the impression that, if anyone was to own and operate a brothel, it might as well be Dennis. Hof has taken brothels out of the trailer.

Hof (with collaborator Pablo Fenjves, the former National Enquirer writer who co-wrote O.J. Simpson’s infamous “If I Did It,” the alternate reality tome that was both a New York Times bestseller and destroyed the imprint ReganBooks), weaves a compelling linear narrative through some cinematic plot points: his formative meeting, at age eight, with Marilyn Monroe at the Arizona State Fair, his castrating mother (who “wore [Hof’s father] down to a nub,” to borrow a line from Tony Soprano — another big, charismatic guy who ran girls), his financial and (therefore) emotional betrayal by his own father and offspring, and his coming of age in middle age as the King of the Nevada Brothels: a man who gussied up and legitimized a collection of dusty trailers in the Nevada desert by chutzpah, hucksterism, and Howard Stern.

And the critical reader will enjoy this book better if he keeps that in mind. Hof is the hero of this tale (the hardcover edition even has a 16-page comic book called “Sir Daddy,” depicting Hof as a knight and Ron Jeremy as his jester) whose only shortcoming is that he simply cannot be tied down to one woman.

Throughout “Pimp,” Hof patiently explains that his love for a series of women, including wives and workers at his brothels, never wavered but for their insistence he give up fucking other women. He just can’t, it’s tragic, and this is his cross to bear. In the meantime, he constantly updates his will to include a provision for the latest girlfriend.

Armed with a positive attitude and solid advice from Dale Carnegie and other How To Get Ahead courses, Hof schools his employees on how to sell themselves, and spins anecdote after anecdote about Andy Kaufman, Vince Neil, Ron Paul (!), and other famous acquaintances and friends. But as the book progresses, a sadness creeps in.

“I had more money than I could spend in three lifetimes,” he writes in the wake of another breakup. “So what the fuck was the point?” 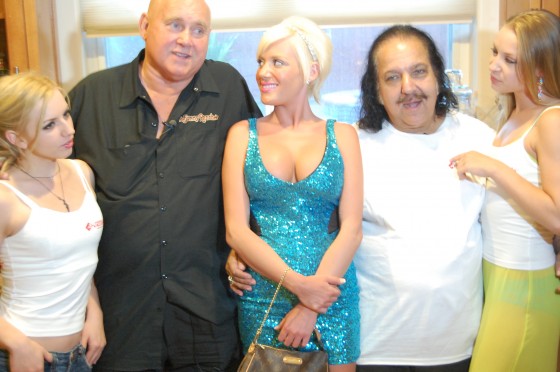 The book is also filled with reminiscences about Hof from other people, which at first seemed like a space filler and then seemed narcissistic — and maybe that’s more likely — but they serve to validate Hof’s story and occasionally cast him as a less savory character than he portrays himself.

It seems particularly gutsy, this opening himself up to criticism, but there isn’t too much publicity Hof shies away from. He even prints the evaluation of a psychologist. Yeah, there’s some narcissistic personality traits in there.

But even if we are aware of the hook (Keith Richards’ “Life” began and ended with “Malaguena,” Hof’s begins and ends with Marilyn Monroe), “Pimp” is filled with useful data about the curious workings of the Nevada brothel system, its licensing requirements, the daily lives of legal brothel workers, and a history of how the desert got taken over by prostitutes. Much of the story works to Hof’s favor and, even as he admits certain vulnerabilities, one gets the impression that there’s a little sleight of hand going on. But that’s all right — everyone’s eyes are wide open in this world.

Hof is such an easy storyteller (like his friend Ron Jeremy, whom Hof calls his #1 Bitch) that it’s possible at times to let a troubling thing pass without questioning it. If, as one chapter states, “Celebrities Don’t Pay,” why had Lamar Odom racked up a $70,000-plus bill at Hof’s sister brothel, the Love Ranch, in October? A Kardashian-adjacent personage should surely join Vince Neil in the Fuck for Free club.

If the Marilyn Monroe at the Arizona State Fair factoid is apocryphal (and it’s so “Candle in the Wind”-level depressing to think of her — or anyone — in Arizona), we forgive Hof for seducing us. He’s like the champagne room dancer who tells you she’s in nursing school: you really want to believe her but it would be O.K. if she’s fibbing, too — because the story is worth it.

Hof is slowed by diabetes and in a reflective mood by the end of the book. He will be 70 next year and his annual birthday party promises to be legendary and bittersweet. Will he find love in a form that is not his dog or Ron Jeremy? How will he spin it if he does? This reader wishes Hof a 40-year-old that will roll her eyes at his bullshit but love him anyway.

Buy The Art of the Pimp: One Man’s Search for Love, Sex, and Money