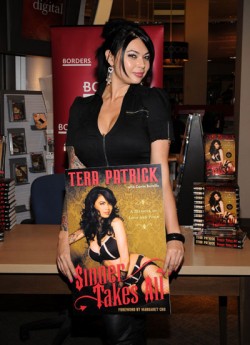 “I didn’t get into half of the reasons behind my divorce from my ex-husband,” Patrick told me, not mentioning the words “Evan Seinfeld.” Still, the final chapter of “Sinner,” written after the initial final draft of the book was finished, is unflinching about what torpedoed their marriage.

That said, Patrick’s book should not be confused with “Sinner Tells All.” Just because it is unflinching doesn’t mean it scorches the earth. The reader – even if he knows a lot of the story already – goes on the rollercoaster along with Tera, and is as surprised as she is when the twists come.

The interview you’ll hear below was my third attempt to talk with her. The first time we’d talked, Patrick was on the road from Las Vegas, where she now lives with her mother. I started the interview by telling her how much I enjoyed the book and how many other celebrities would have not had the guts to write so frankly about the delicate subjects she had.

Among these, I wanted to know why her father had let his 14-year-old daughter leave home to model in Tokyo. The book does not portray her dad as negligent; just the father of an impossibly attractive and free-spirited girl who had better get out of the way of the train.

But the relationship I wanted to hear more about was Tera’s connection to her mother, whom her American father had met in Thailand while he was a soldier. After her parents split, Patrick’s relationship with her mother soured, and one day her mother punched the pre-teen hellion Tera in the face.

It was in the book, but when I raised the subject during our first call, the line went dead. After a couple of attempts to continue the interview, I was politely asked by one of Tera’s publicists to avoid bringing up her family.

For Tera, I think, once she committed that unpleasant news to paper, it was over, and she was ready to move on.

So the triumph of “Sinner Takes All” is that Tera Patrick took some serious risks with her autobiography, went out of her comfort zone, and delivered a very credible account of what it is like to be her, and the reader is richer for the experience.