Anyone who is legitimately Irish has a problem with the way we Irish-American-identifying types celebrate St. Patrick’s Day. But they also have a grudging respect for how overwhelming our response to the day is, like St. Patrick is a few lumbering Scud missiles lobbed over the border from Lebanon and a “St. Patty’s Day” blowout at some college is the earth-flattening Israeli counteroffensive.

In the late 1990s I had a job in Boston, as did many people from Ireland. Though it was the time of the Celtic Tiger, the Irish economic recovery that reduced emigration levels for the first time in a century, my girlfriend at the time had come to Boston to work and travel. It was she who taught me everything I know about responsible drinking.

To the Irish people I met, responsible drinking was paying attention to who bought each round. Each night we would go out and spend a hundred bucks on drinks, then 20 bucks on chips and peanuts because we’d forgotten to eat, then 30 more on cabs home because we had missed the last train. Since you could smoke in bars then, our clothes and everything about us would smell like the Marlboro Man’s soul patch.

During this time Ruth (I’ll call her Ruth because that was her name) would cluck her teeth with triumph whenever we passed a street with an Irish name.

The next morning Ruth would shock me by either managing to go to work or by calling her Irish boss, explaining that she had gotten wrecked the night before, and wouldn’t be coming in.

“Sure we’ll be seeing you tomorrow right,” said Ciaran.

It was a fascinating time for me. Sex with Ruth was like “The Devil in Miss Jones” except whiter. She was tremendously guilty about it but she couldn’t get enough of it. I didn’t go to church and many Sunday mornings I’d see her praying naked by the side of the bed.

Another thing I’ll always remember fondly about Ruth is her opinion on British women. “English sloots wear their mattresses on their backs,” Ruth said, managing to sound prudish with her ass hanging out of her miniskirt. I mentioned this to Samantha Bentley once and she said, “We say the same thing about Irish girls.” Am I fond of Samantha Bentley because she reminds me of Ruth? Perhaps. 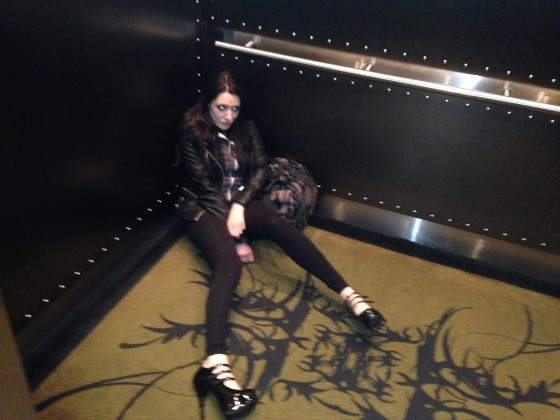 Why do Irish-Americans want to be real-Irish instead of Pinocchio-Irish or Velveteen-Irish? I can’t speak for anyone else, but I like the perennial cocky underdog, the storyteller, the charmer, the rascal, the poet, the tough chick, the fiery redhead, the lapsed Catholic, the dancing-eyed, the brawler, the Pogues and the Waterboys, the caregiver, the partner in crime. I could do without the pedophile priest, the Republican terrorist, and anyone who only drinks too much on St. Patrick’s Day like a goddamn tourist.

One March 16 we were watching an Irish band play by Fenway Park. It was before 2001 so the conversation we had was both plausible and just so crazy it might work.

“Let’s buy tickets to Ireland and have breakfast in Dublin on Paddy’s Day,” Ruth said.

About a half hour later I remembered I didn’t have a passport so it couldn’t happen, but for those 30 minutes we were fucking delighted. It is that sense of abandon in the pursuit of an even greater joy that I will always associate with the Irish (and with alcoholics, but the Irish don’t need to be drunk to be Irish, which is their great contribution to the world).

But we were drunk that night, and after our $30 cab ride (I think “Paddy’s Week,” as Ruth called it, had cost at least a thousand dollars — I think I could make a thousand dollars for drinks last six months now, even at 2015 Los Angeles/Vegas/airport lounge prices) we found ourselves back in her apartment, on the bathroom floor, in a puddle of melting snow from our boots. She was just about incapacitated but was telling me to take off her pants. I remember blinking at the shocking whiteness of her legs as they emerged from her jeans. I wasn’t sick, but just the act of pulling her pants off wore me out.

But I loved my girlfriend so I went down on her. Pants at her ankles, strong fishbelly-white legs converging at florid pink where everything tasted like cigarettes strung across a heated copper wire. I really think I had an out of body experience. I saw us from above on the checkered floor, her head banging against the door and waking her roommate, Siobhan from Cork. I hit the CD player and the soundtrack to “Trainspotting” came on, which we listened to all the time. I was utterly disconnected, only knowing what parts to hit, grabbing her clammy ass. She was too drunk (and too honest) to fake it so getting an orgasm out of her that night was like pulling a piano up the hill with my teeth. But I got it, God Damn It.

We woke up a few hours later on that same floor. I felt like I’d been hit in the face with a cake made of skin. Siobhan opened the door into Ruth’s head. “Fookin’ Hell,” Ruth said.