The scene starred Monica Breeze and Talon who was, I believe, the nephew of the ill-starred TTBoy (not to be confused with the groundbreaking and outspoken Tristan Taormino, who was known throughout the industry as TTGirl). If you’re here from the InstaGramPonante (@gramponante) Instagram page, you’ll remember that I had some trouble remembering Raylene’s name. I had to look up Monica Breeze, too. 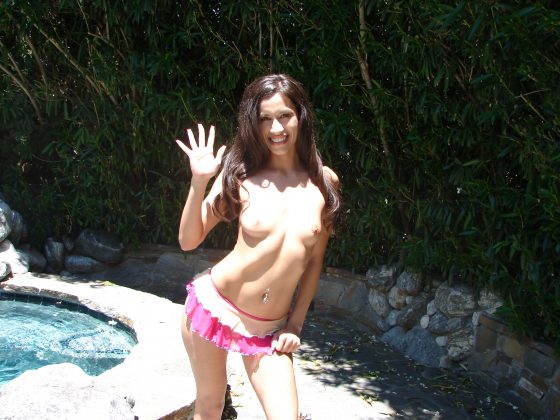 I took several pictures of the lissome Ms. Breeze by the pool, and then followed her and the small crew into a room off the yard. There I found a couch that had been the star of many a scene and which, a few years later at the memorial service of the great and kindly Sledge Hammer, I sat on. But I didn’t sit on it this June day, as Monica Breeze was about to get her gaping butthole cummed in thereon.

One of the writer Anthony Burgess’s volumes of autobiography is brilliantly titled “You’ve Had your Time.” I think of this often. Not in a “you’re getting old, Grams” kind of way, but in a “you will get old, Grams,” kind of way. I’ve been #blessed to have reasonably exciting relationships throughout my porn career despite my intriguingly bad looks. You know how people used to say that Jimmy Page made a deal with the Devil for his Led Zeppelin success? I have heard on multiple occasions that the fact that I have ever been laid at all, much less regularly, had to have some Faustian bargain attached to it. Well Fuck You. In any case: in all my adventures the idea of a gaping butthole never turned me on, sort of like Prince’s overcast days. And sadly, nothing about the sun and Monica Breeze mixed that day to make me a gaping butthole fan.

You know how you might look at someone and say, “Well, I’ve never been a boob/foot/leg/calf/butt/hair fan, but oh my god…”? Well I’m pushing 25, my friends, and there’s no gaping butthole that’s ever going to make me slow down on the way to Carl’s Jr.

The real takeaway here is that, even on a movie with a small crew, one is guaranteed to see twice as many gaping buttholes on set as are advertised on the boxcover.

For this reason I will coin the collective term Wrath for a grouping of Buttholes, as in John Steinbeck’s landmark American epic “The Gapes of Wrath” featuring the iconic Tom Load.