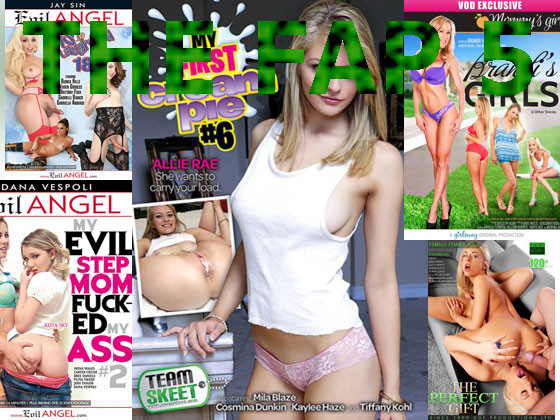 Each week a green-visored accountant tells me the top-selling movies at Gamelink.com (my San Francisco-based employer that has two Keurig machines that I use shamelessly whenever I’m up there) and I write the following blurblets for my friends at Playboy Radio. While this week’s list features as many fuck-your-stepmom movies as Gamelink has Keurig machines, my choice of Boxcover of the Week goes to the one featuring Mila Blaze. She has a frank look on her face and a pantsless look everywhere else.

What better way to ease into this week’s onslaught of lust and debauchery than with the gentle, nurturing fuckfest that only a stepmother can provide? It’s

“BRANDI’S GIRLS AND OTHER STORIES“

Number Four this week involves one of my favorite terms in pornography, art, politics, and religion: It’s

Our Fap 5 Threeway may be down from Number One last week but is still on the top of my Amazon wishlist:

I hate to sound like a disappointing facebook headline, but these guys nail it. “The Perfect Gift” is about the day your wife or girlfriend brings her hot friend home for the two of you to fuck and—we’re assuming—doesn’t guilt you about it for the next 20 years.

We now come to Number Two, the latest in a beloved transsexual series:

Every week you loyal listeners tune in and listen to me talk about boobs and butts and vaginas and stepmoms and stuff like that, but I so rarely talk about the penises of transsexuals, even though there’s at least one transsexual movie in our Fap 5 every week. Well, there is a penis in Jay Sin’s 18th installment of “TS Playground” that looks like a Lovecraftian root vegetable, and you’ve got to see it or the world might end.

Finally, our Top of the Faps this week gets stepmom out of the kitchen and into the ass of her stepdaughters:

Weren’t we just talking about stepmoms? Our old friend Dana Vespoli returns with her latest assault on the American family and its asses. Not only do we have a stepmom, but she’s evil, and she’s got a thing for the asses of the adult stepdaughters she inherited in the marriage. Would 70 percent of marriages still end in divorce if all stepmoms went out and ass-fucked their stepdaughters? No, I’m thinking 100 percent of them would