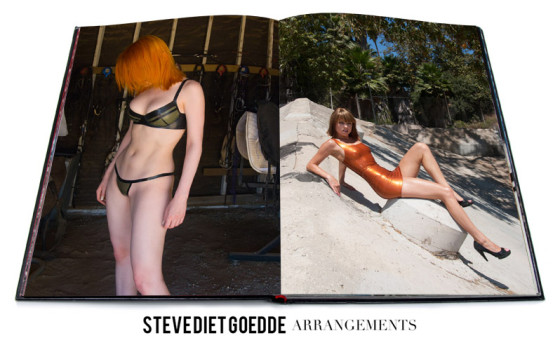 Photographer Steve Diet Goedde is, like Ed Fox, Dave Naz, and the late Carlos Batts, a revered and respectful chronicler of California’s fetish and otherwise-professionally-nude scene. The staff photographer for Stockroom.com and its compelling catalogues and website, Goedde has made a career out of the art of adult photography, creating arresting images of women that are at once accessible, gracious, and dangerous.

Celebrating a quarter century as a professional photographer, Mr. Goedde is approaching his 50th birthday on February 20 with a nearly-funded Kickstarter project: several editions of a comprehensive collection of his photographs: The 3-volume “Arrangements.”

Gram: Describe the give and take of asking something envelope-pushing from a nude model.

Steve Diet Goedde: First of all, I have great respect for my models and consider them friends and collaborators. I always respect boundaries so I never ask them to do anything they would feel uncomfortable doing. Of course I may suggest something, but if they show any apprehension, then I simply move on to the next idea. The only real thing that I have to push them on sometimes has to do with locations. For instance, they may be apprehensive about sitting on something because it’s dirty. So I remind them that a few smudges on their skin is nothing when you take in account the quality of the shot and that the image could (hopefully) be iconic for many years to come.

Gram: In the early years, give an example of how your own confidence played a role in getting these poses. Were you surprised at how compliant with your suggestions some models were?

SDG: Since the very beginning, I always had a sense of the mood I wanted to convey with my photographs. If a certain model or their posing didn’t quite fit into my aesthetic, then I wouldn’t even consider taking the shot. Sometimes models pose too much or they pose too porny – I know all those poses and know which ones don’t fit with my style. Many established models know all their best poses and it’s hard to break them of that. It can take some time during a shoot for them to relax and just let me tell them what to do. They’re always happy and surprised with the results. I can’t really define what my style is, but I definitely know what it’s not.

Gram: Who are some models who really taught you about being a better photographer?

SDG: It’s always a treat shooting with models who are also artists/photographers. They know what it’s like to be on both sides of the camera. So when shooting together, we’ll share stories about the various challenges and joys of working with models and sometimes even nerd out about techie stuff. Some of them have photographed me, and when that happens, I really get a new perspective of what it’s like in front of the camera, especially in terms of direction and communication. Every photographer should pose for photos at least a few times in their lives – it’s the most eye-opening thing they can do!

Gram: I see that the Kickstarter is for Volume III of “Arrangements,” covering 2007-2015. Were the first two already published and you just didn’t tell anyone?

SDG: Volume III of “Arrangements” will be released first because for years, people have been asking me for a book of new work. If I had started at Volume I, it would’ve been all the material that everyone has already seen because it’ll consist of the Beauty of Fetish years. Although there will be tons of never-before-seen work from that era, it just felt fresher and more exciting to release the new work first.