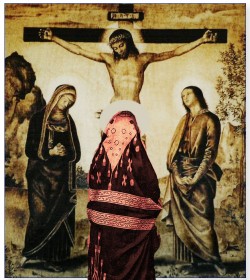 While undeniably blasphemous and heretical to some ears, the notion that Jesus gave of His holy person via the only appendage within reach and not nailed down is also seen as a comforting sign that the Messiah was easygoing and, until the end, human.

Many of the same conditions required for auto-erotic asphyxiation, such as suspension and decreased bloodflow to the brain, were present at the Crucifixion, though Crucifellatio, often mistakenly called The Holy Blumpkin, is to some as apocryphal as Christ Himself, and to others a testament to the Nazorean’s giving nature.

It is a fact that injuries to the spinal cord and cerebellum, as are common with hanging or gunshot wounds to the head, affect the genitals of men and women. One in three die with a “death erection” of the penis or clitoris. It is reasonable to believe that Our Lord was similarly affected.

After all, Christ bade his apostles to eat His Body and Blood. After that, He commended His spirit into His Father’s hands. The first “green” religious icon wouldn’t have wanted anything to go to waste.

And Jesus is not alone of the Big Three of world religions in offering a prostatic memento mori.

In Edward Gibbon’s “The Decline And Fall of the Roman Empire,” Mohammed’s son Ali is alleged to have said, “O propheta, certe penis tuus cælum versus erectus est” (O prophet, thy penis is erect unto the sky). Whether the prophet’s favorite wife, Aisha, helped him out at this point is not known.