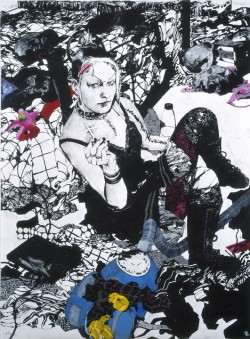 ,” a densely-worded, witty, and personality-rich snapshot of the things he saw while working with the likes of first-decade altporn figures like Eon McKai and Benny Profane.

“Between Alice’s apartment and Hollywood Boulevard there’s the spare-changing territory of a homeless girl with long, dirty-blonde hair who I keep thinking is like a totally-failed version of Alice—She wears a sweatshirt advertising (Bad Religion’s) Suffer. I keep giving her tens and twenties thinking if she’s heard Suffer and still can’t handle LA she must be in very serious trouble. She also makes me think of an early Bad Religion song aboUt trying to cross the street in LA—”Frogger.”